Remember the classic block stacking game Jenga?  Players are faced with a tower of wooden blocks, taking turns removing them one at a time, replacing pieces onto the top, until it becomes unstable and falls?   For those who are patient, committed, and “in the game”, it is exciting to watch a once solid structure become wobbly…and when the right piece is removed, the exhilaration of the crash signifying a victory.

The events taking place currently at the University of Missouri are reminiscent of the game Jenga.   Students have been sharing their experiences of racism, racist behavior, and other instances counter to the institution’s Statement of Values, specifically Respect and Responsibility…just like Jenga game pieces.  Removing them from the long-standing foundation of campus culture and placing them on top for all to view…and waiting to see what happens.  And like the game, even though pieces are removed, the strength of the culture allows for the structure to remain in place.  But unlike your rainy Saturday afternoon game of Jenga, the real-life version has players that come and go, semester after semester, year after year…with the game being reset…no true resolution. 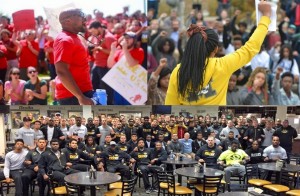 This week, a major piece of the University of Missouri version of Jenga has been extracted.  Yes, graduate student Jonathan L. Butler (Blue Phi) was steadfast on nearly two weeks of a hunger strike after seeing a swastika drawn in human feces (now you know that’s straight nasty).  One piece removed.  Yes, the #ConcernedStudents1950 student group had a loud, profound, and viral protest.  Another piece removed.  But the power play of the day was the members of the football team, along with their coaches, issuing their statement of solidarity with their own champion-style strike, refusing to play anymore games until President Tim Wolfe resigns or is removed from his office.  With millions of dollars on the line, a public relations nightmare…oh yeah…and the duty to do what is right, the University of Missouri Board of Curators announced Dr. Wolfe’s resignation.

The tower falls! Or does it?

One thing about Jenga, after the structure collapses there is a mess all over the table.  Mom and Dad aren’t going to let you just walk away and get a snack…it has to be cleaned up.  The tower is rebuilt and ready for a new game.  This is the challenge for the Mizzou community.  When this tower is put back together, serious discussions on what will be different has to take place.  One person may be gone but the culture remains.  That is what has to be addressed or the same old game will be played over and over and over.

This is an academic and cultural watershed moment that should not be squandered.  It is a chance to fully involve everyone (because everyone is impacted) in the resolution of what the community can and will be.  In fact, it should be exciting.  Reinvention is the hallmark of progression.  It can be done, the time is right, and the University of Missouri is the place.

Wishing the best for you…Mizzou.

Oh, by the way, did you know that Jenga is a Swahili word meaning, to build.  Now is the time for the community of the University of Missouri…to Jenga.

Guy A. Sims is the author of the forthcoming Brotherman graphic novel, Revelation. He is also the author of the romantically romance novel, Living Just A Little, and the crime novellas, The Cold Hard Cases of Duke Denim.     Contact or comment at guysims.com or @guysims6